Home Uncategorized A tree grows where?

A tree grows where? 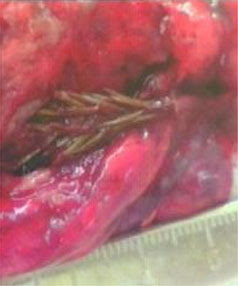 REUTERS
FIR SURE: A Russian man has had a 5cm fir tree removed from one of his lungs.

A Russian man who was being operated on for a suspected tumour ended up having a fir tree removed from one of his lungs. The 5cm tree, was discovered by surgeons when they opened up Artyom Sidorkin, 28, according to Russian newspaper Komsomolskaya Gazeta.

It is believed Mr Sidorkin inhaled a seed, which then sprouted into a small fir tree inside his lung.
He went to doctors complaining of extreme chest pain and coughing up blood.
Surgeon Vladimir Kamashev told the newspaper he was sure it was cancer. “We did X-rays and found what looked exactly like a tumour. I had seen hundreds before, so we decided on surgery.”
The tree was discovered when surgeons took a biopsy before removing the major part of the man’s lung. “I thought I was hallucinating,” said Dr Kamashev. “I blinked three times as I was sure I was seeing things.”
“It was very painful. But to be honest I did not feel any foreign object inside me,” a relieved Mr Sidorkin told the paper.

Latest posts by WBFJ (see all)

With Google+ plugin by Geoff Janes